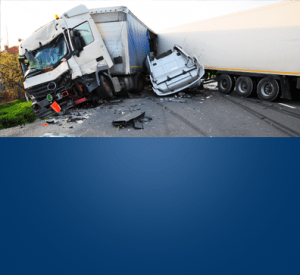 Houston, Texas (January 20, 2017) –  A vehicle caught fire early Thursday morning following a three-vehicle collision in Houston, according to an article by ABC 13.
The fiery crash took place at about 5 a.m. Thursday between a Waste Management truck, an SUV, and an unknown vehicle on Interstate 610 North Loop at TC Jester.
Reportedly, the garbage truck flipped over to its side in the off-ramp at Ella while the SUV caught fire in the main lanes closing all lanes at TC Jester.
The lanes reopened around 10:15 a.m. However, the off-ramp at the intersection remained closed.
Reportedly, the SUV driver fled the scene after the vehicle burst into flames.
Firefighters responded to the scene and managed to put out the blaze.
Hazmat was also called to the scene due to a possible fuel leak from the overturned truck.
No injuries were reported in the incident.
The accident remains under investigation by the police to determine the cause and liability.

Several Injured in Truck Accident on Business 20 in Odessa

1 Dead, 1 Hospitalized after 3-Vehicle Crash on Interstate 35 in Laredo